These four photos were all taken in the very same spot on the very same day every year since 2014. They document my journey as a mother and today I took the last photo in the series. A photo with both of my children in my arms. I’m certainly not saying that my journey is over, but this time of creating new life is and my family is complete. 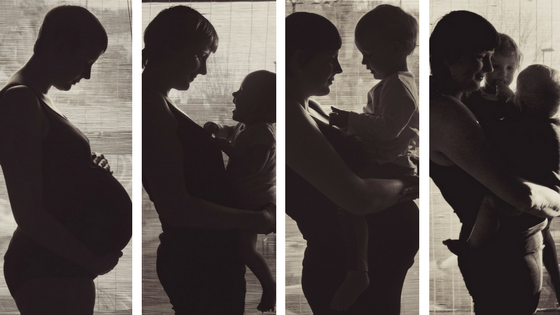 I took the first photo on the 6th April 2014, Lyra’s due date. I stood there whilst Matt took photos of my bump with a thousand thoughts running through my head. Was our baby a boy or a girl? What would they be like? What would they look like? I was trying to prepare myself for the labour that I was sure was just around the corner and panicking about how I was going to look after a baby. I would love to say to the woman I was then to calm down. Enjoy those last eleven days before your baby arrives. Labour will not be anything like you planned for, things will go wrong, and you will be so so sore afterwards but it will be worth it a thousand times over. I know you’re convinced you’re having a boy but you will have a girl and what a girl she will be. She is fierce, determined, curious, and oh so wonderful. She makes you laugh and want to pull your hair out in equal measures but not a day will go by where she doesn’t make you proud. Your life will change, of course it will, but you have got this. And you will learn that your husband makes a fantastic father and he will be the perfect partner in this adventure.

In April 2015 I took the second photo and shared a post about the difference a year makes. Lyra and I had found our rhythm and become a little team. One thing I didn’t share in the post or anywhere in fact was that I was desperate for a second child, we were still planning on having three at that point, and we wanted them close together. I’d love to go back and tell myself to relax, we’d only been trying for a few months and we still had another few to wait but it would be worth it. I’d tell myself to enjoy that time as a family of three, watching Lyra grow into a crazy little toddler.

Before I knew it we were in April 2016 and I was about eight weeks away from giving birth to our second child. Once again my head was full of the usual late pregnancy worries and excitement and on top of that this time I was also worried about how it would affect Lyra. I knew her life was about to be changed forever and that seemed like such a big thing to do to a two year old. I couldn’t help but worry about labour more this time after having a difficult labour and a large post-partum bleed with Lyra, I was desperate for things to go more smoothly second time around. I’m not sure I’d go back and tell myself how labour went because despite having what I had pictured as the perfect labour it resulted in a larger bleed than before and being rushed into surgery moments after Athena was born, something that I’m still coming to terms with ten months on. But there is no need to tell pregnant Amy that, sometimes ignorance is bliss. Instead I’d tell her how much Lyra loves her little sister, how she welcomed her with open arms and has been so kind, so loving ever since. I’d tell her how watching her two daughters play together is quite frankly the most beautiful thing in the world and that I still can’t believe how lucky I am to have them both. That Athena is the perfect final piece of our family puzzle and I really cannot imagine life without her.

But it’s easy to look back on these moments and offer advice, things that seem so clear now seem impossible at the time. If it was that easy I’d tell the woman in that final picture, the one taken today, that it’s OK not to be able to ‘do it all’. That although there are days that you feel like you’ve failed, maybe the house is a mess or you felt like you lost your temper during the day, maybe the kids didn’t eat as much fruit as they should or you didn’t make it out of the house or even out of your pyjamas, everyone has days like that. The important thing is that you love your children and that the good days far outweigh the bad. So stop worrying. See, easier to give the advice than to take it. 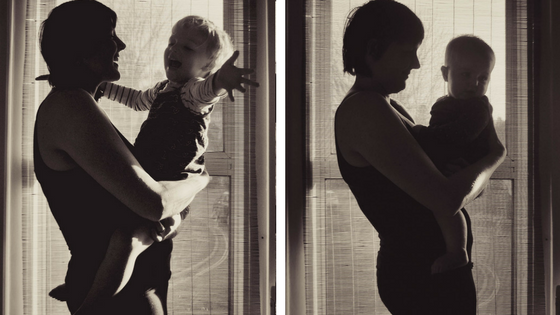